Marjorie Simmins is an award-winning journalist and the author of four non-fiction titles, Coastal Lives (2014), Year of the Horse (2016), Memoir: Conversations and Craft (2020), and Somebeachsomewhere: The Harness Racing Legend from a One-Horse Stable (2021).

Simmins also teaches memoir writing across Canada, at venues such as at the UBC Alumni Centre, in Vancouver, BC (2016); StoryFest, in Hudson, QC (2017); Thinkers Lodge (2014-2019); the Fortress of Louisbourg, NS (2019); and the Haviland Club, in Charlottetown, PEI (2022). She is always looking for new and inspiring venues at which to offer workshops.

In the spring of 2021, she was a reader for the CBC Non-Fiction Competition. Currently Simmins heads an ongoing Coast to Coast to Coast memoir writing workshop via Zoom, along with offering her usual in-person workshops. She plans to begin a new book soon.

Somebeachsomewhere: The Harness Racing Legend from a One-Horse Stable 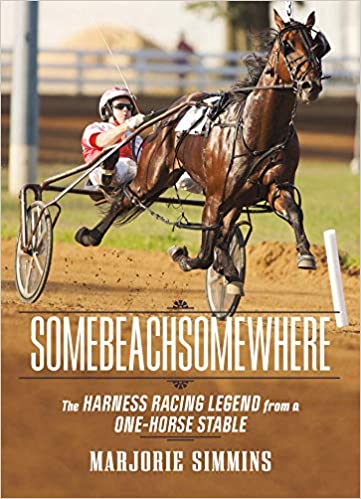 A comprehensive, fully illustrated biography of Nova Scotia’s Somebeachsomewhere, the greatest standardbred pacer of all time, from the award-winning author of Year of the Horse.

It’s November 2006 and Brent MacGrath, a car salesman from Nova Scotia, has just had his first glimpse of a gorgeous yearling at the Lexington Yearling Sale—and his heart skips a beat. He takes another look. Even this young, the bay stallion has size and “presence.” Against all odds, and with limited funds, MacGrath makes a successful bid for the colt.

Somebeachsomewhere: The Harness Racing Legend from a One-Horse Stable is a work of narrative non-fiction that follows the life and career of the Ohio-born, Canadian-sired superstar pacer known as “Beach” who belonged to a syndicate of six owners from Canada’s East Coast. From a relatively humble lineage, Somebeachsomewhere turned out to be a horse of a lifetime: a world-champion Hall of Famer, smashing records and setting a single-season earning record as a three-year-old. Many consider Beach, who died unexpectedly in 2018, the greatest pacer and Standardbred sire of all time. Canadian and American racing fans loved the friendly stallion with “an extra gear,” and threw “Beach Parties” whenever he raced.

This is the first-ever complete, generously illustrated account of “the Beach,” a horse who captivated the world with his speed, courage and near-flawless gait. It is also a story of improbabilities and magic, featuring dozens of interviews with top American and Canadian horsemen and women, the owners of Empire Stallions in Avenel, Australia, and harness racing industry professionals. 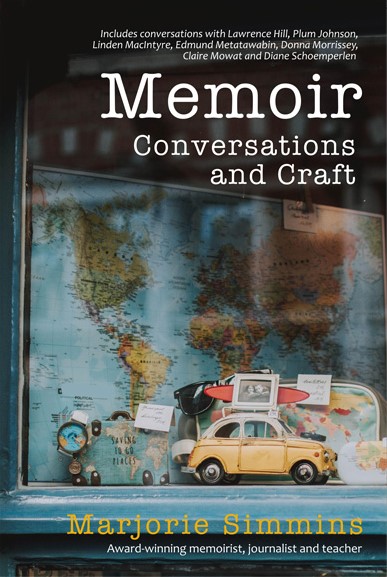 Memoir: Conversations and Craft is intended for any reader who is fascinated by personal life stories that demand to be read, refuse to be forgotten. Whether you are an emerging or experienced writer, this reflection on writing can galvanize you.

Included in this celebration of memoir are interviews with best-selling memoirists and top fiction writers: Lawrence Hill, Plum Johnson, Linden MacIntyre, Edmund Metatawabin, Donna Morrissey, Claire Mowat, and Diane Schoemperlen. All speak with candour, humour, and compassion about their journey to memoir.

“For everyone who has ever whispered, ‘I have a story to tell,’ this is the book you’ve been waiting for. It’s an imaginative how-to-write-a-memoir from a pro. Great reading. Terrific tips.”
Sally Armstrong, journalist and author of The Nine Lives of Charlotte Taylor

Memoir: Conversations and Craft is available online, from Nimbus Publishing, www.nimbus.ca and from Amazon.ca Or, for a signed copy, you can order from the author’s Online Bookstore.

Year of the Horse 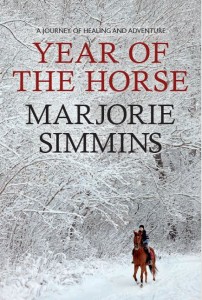 My new book, Year of the Horse, published by Pottersfield Press in 2016, is available in bookstores across Canada, and online, at Chapters and Nimbus. Year of the Horse is about horses, healing and improbable dreams. It’s for every person who’s been really hurt – and has come back from that, different, and in some ways stronger. It’s about daring to believe in the power of your own story.

” …I’ve almost finished Year of the Horse and am struck by two things: your vivid evocation of places and states of mind, and your richly layered animal characters. Each horse in the story has a distinct personality equivalent to a human character in the hands of a fine novelist. None is sentimentalized. It takes great skill to capture both the otherness of a beloved animal and the intimacy shared with the human, which becomes a conduit to so many things that we self-important bipeds tend to complicate with our own kind.” 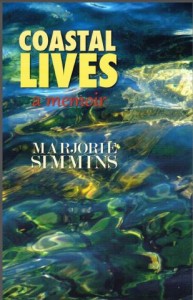 “A terrific tale. The urgency and passion of her prose makes this memoir such gripping reading. At the heart of her story is the unfolding of an extraordinary love affair between her on the Pacific Coast and, 4000 miles east on the Atlantic, fellow writer Silver Donald Cameron.”

“Brimming with heart, wit, and perceptive detail, this affecting memoir is a testament to the power of words and lure of the sea. Settle in for a warm, poignant and intimate story.”

“Utterly engaging, irrepressible and courageous, this unforgettable memoir will ‘torment’ you (as Cape Bretoners say) from first page to last. A masterly example of the form.” 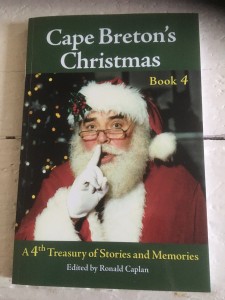 A 4th Treasury of Stories and Memories
edited by Ron Caplan, Breton Books
“53 stories from the heart of Cape Breton’s Christmas – told with tenderness and rich good humour.”
“Escape of the Fallen Angel,” by Marjorie Simmins 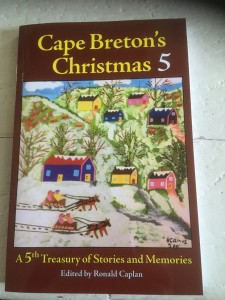 A 5th Treasury of Stories and Memories
edited by Ron Caplan, Breton Books
“Welcome to 59 stories from the heart of Cape Breton’s Christmas – the fifth collection of memories filled with tenderness and daring, great compassion and terrific good humour – the makings of a joyous and memorable holiday.”
“Christmases by the Salish Sea”, by Marjorie Simmins 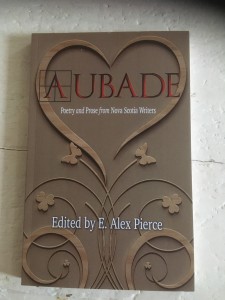 edited by E. Alex Pierce
“A singular anthology featuring the work of Nova Scotia poets and writers inspired by the aubade: originally a medieval dawn song expressing the regret of lovers parting at daybreak, the aubade is a poem type that has no fixed metrical form, thus allowing prose writers to adopt its elements – daybreak, parting, a watchman, a window, self-realization, loss and reconciliation – and re-form them into new expression ….” 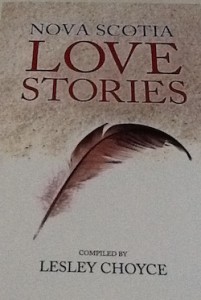 “In Nova Scotia Love Stories, [editor and publisher] Lesley Choyce has assembled some of the province’s most beloved authors who explore through fact and fiction the myriad ways in which a love story exists. These writers with a strong emotional connection to this shaped-by-the-sea province demonstrate the many guises and moods of love: for the young, the aged and all points in between … The stories are heartwarming, touching, funny and profound …” Among the authors are: Marjorie Simmins, Silver Donald Cameron, Jon Tattrie, Steven Laffoley, Sheldon Currie, Harold Horwood, Carol Bruneau, Michael Ungar, William Kowalski, Don Aker, Chris Benjamin, and Leslie Choyce.

Available from bookstores and the publisher: http://www.pottersfieldpress.com/ 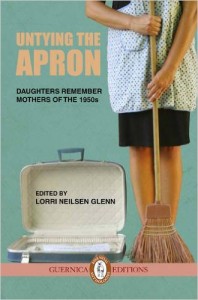 Untying the Apron: Daughters Remember Mothers of the 1950s

It was such a privilege to have an essay of mine published in this anthology. “The House with Many Doors” is a tribute to my mother, Barbara Jeanette Simmins. 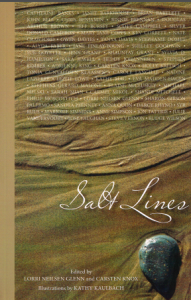 Included in this anthology is a short essay I wrote called “The Rowdy Lot,” about overcoming the first and only period of writers’ block in my life.

“Fify-five examples of writers’ wisdom on inspiration, expectation, success, failure, blocks, breakthroughs and especially, process. The writers sampled are published Atlantic Canadians, all of whom approach their process in a singular way. Here is where they share their secrets.”

Trips from Here to There

My essay “Trips from Here to There” was first published in Saturday Night Magazine, in 1993. In 1994, it won Gold at the National Magazine Awards in Toronto, Canada. It has since been anthologized four times, as below.

Journeys Through Our World. Third Edition 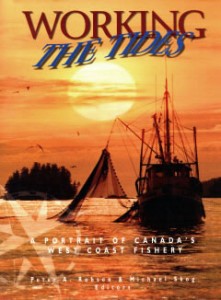 Working the Tides: A Portrait of Canada’s West Coast Fishery

Harbour Publishing
Edited by Peter A. Robson and Michael Skog
1996

A West Coast of Canada fisheries reporter at the time, I was delighted to have my article, “Three Generations of Annieville Fishermen” included in this anthology.